Auckland Airport is located in Mangere, a suburb of Auckland 21 km south of the city centre. This is the largest and busiest airport in New Zealand with over 13 million This is a public Airport mainly controlled by the Airports of Thailand. It is mainly situated in the Racha Thewa region which is in Bang Phli district, Samut Prakan Province, at a distance of about 25 Km towards the eastern part of Bangkok downtown. It has its IATA code as BKK and ICAO as VTBS. It is a home for the Bangkok Airways, Orient Thai Airlines, the Thai AirAsia and the Thai Airways International. It is located at a distance of about 2 m above the sea level. It is also known as the Suvarnabhumi Airport or the New Bangkok International Airport as it is an international airport. We have our tie ups with a large number of suppliers like Alamo, Sixt, Advantage Rent a Car, National and many more. So, you can always count on our car rental service available at the Bangkok Suvarnabhumi Airport.

Bangkok is considered as the capital city as well as the largest city in whole Thailand. The other names for this city add Krung Thep Maha Nakhon or Krung Thep in Thailand and it means that Bangkok is a city of angels. Bangkok has many districts like Bangrak, Pinklao, Sathon, Phra Ram 2, Phetchaburi, Phra Nakhon and if you want to visit these, you can go for the car rental service directly from Bangkok Suvarnabhumi Airport. You can also visit the famous destinations like Grand Palace, Wat Pho, the Giant Swing, Sanam Luang and the famous Thon Buri. 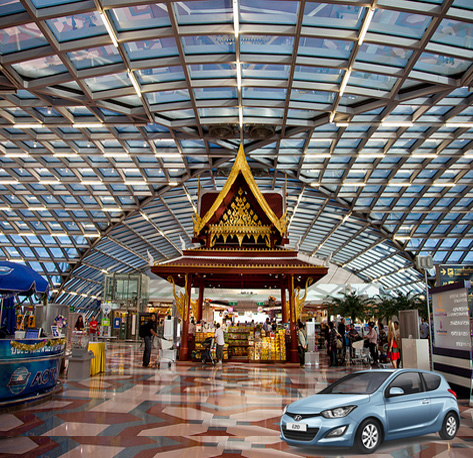 For more car rental locations, please use our online booking form above
Our Call Center